We are the fastest growing major racial group, yet we’re still starved for representation. 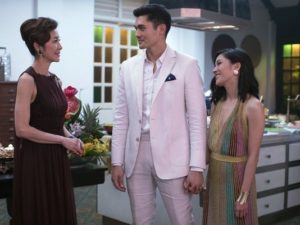 The minute any Asian American makes an appearance in the mainstream media, the Facebook walls and Twitter feeds of other Asian Americans light up: We like the posts about Chloe Kim winning the Olympic Gold Medal for snowboarding, or retweet the trailer to Crazy Rich Asians, the first major motion picture featuring an all Asian cast in years.

Asian Americans are often proud of the fact that we can pull out the names of celebrities and politicians who are Asian at the drop of the hat, like it’s some sort of party trick. But the truth is, we can do so because Asian Americans remain dramatically underrepresented in so many industries.

We are the fastest growing major racial group in America, yet we’re still starved for representation in the media: That invisibility is why initiatives like Asian Pacific American Heritage Month are still so necessary.

Take a look at your movies, newspapers, the evening news. Asian Americans make up a little more than 4% of those who work for newspaper and online media outlets, according to the American Society of News Editors. A USC Annenberg study showed that in 2016, 44 of the 100 top American movies didn’t feature even one speaking character on screen who was Asian.

In this country, Asian Americans seem to face a paradox: We’re the “model minority,” often held up as an example of a group that cannot claim discrimination because of our outsized performance on standardized tests and college attendance. It’s an unfortunate stereotype sometimes used to oppress other racial groups, undermining solidarity with other minorities who struggle with representation issues, too. But it also erases the many Asian Americans living in poverty and struggling, and can fool some to thinking that Asian Americans have already made it in this country.

Asian Americans know otherwise — and this push for accurate representation is at the core of the mission of organizations such as the Asian American Journalists Association. Every May, we celebrate Asian Pacific American Heritage Month as a way to highlight the growing number of Asian American faces that we see in the media.

AAJA was founded in 1981 in Los Angeles, by a group of Asian-American journalists who were eager to help build up a pipeline for more journalists like themselves, and ensure that the news industry’s coverage reflected the reality of the growing Asian community in this country. Now, we have 20 chapters around the globe and more than 1,500 members, representing the more than 6% of Asian Americans who make up the country.

It’s tough to imagine the disparities don’t matter when it comes to coverage. That’s where AAJA plays a crucial role: as a watchdog and a liaison for our community. Among the instances AAJA leaders responded to in the past few years was in response to a Fox News satirical segment blatantly making fun of people in New York City’s Chinatown. The moment sparked a meeting between AAJA members and Fox executives, as well as a town hall to help further the conversation.

But we also know it’s not just about responding to blatantly unfair coverage in the media. We also have to celebrate those Asian Americans who are changing the game: For Asian Pacific American Heritage Month, we honored Diep Tran, an American Theatre senior editor whose pieces grapple with issues of race and representation within the theater industry, and Frank Shyong, a Los Angeles Times reporter whose work captures the diversity within the Asian-American communities of Southern California.

It’s this kind of work that shows us there’s hope to shedding this invisibility that many Asian Americans feel when we turn on our televisions or read our news — and we’ll keep fighting until we finally feel seen and heard.

We use cookies on our website to give you the most relevant experience by remembering your preferences and repeat visits. By clicking “Accept All”, you consent to the use of ALL the cookies. However, you may visit "Cookie Settings" to provide a controlled consent.
Cookie SettingsAccept All
Manage consent

This website uses cookies to improve your experience while you navigate through the website. Out of these, the cookies that are categorized as necessary are stored on your browser as they are essential for the working of basic functionalities of the website. We also use third-party cookies that help us analyze and understand how you use this website. These cookies will be stored in your browser only with your consent. You also have the option to opt-out of these cookies. But opting out of some of these cookies may affect your browsing experience.
Necessary Always Enabled
Necessary cookies are absolutely essential for the website to function properly. These cookies ensure basic functionalities and security features of the website, anonymously.
Functional
Functional cookies help to perform certain functionalities like sharing the content of the website on social media platforms, collect feedbacks, and other third-party features.
Performance
Performance cookies are used to understand and analyze the key performance indexes of the website which helps in delivering a better user experience for the visitors.
Analytics
Analytical cookies are used to understand how visitors interact with the website. These cookies help provide information on metrics the number of visitors, bounce rate, traffic source, etc.
Advertisement
Advertisement cookies are used to provide visitors with relevant ads and marketing campaigns. These cookies track visitors across websites and collect information to provide customized ads.
Others
Other uncategorized cookies are those that are being analyzed and have not been classified into a category as yet.
SAVE & ACCEPT